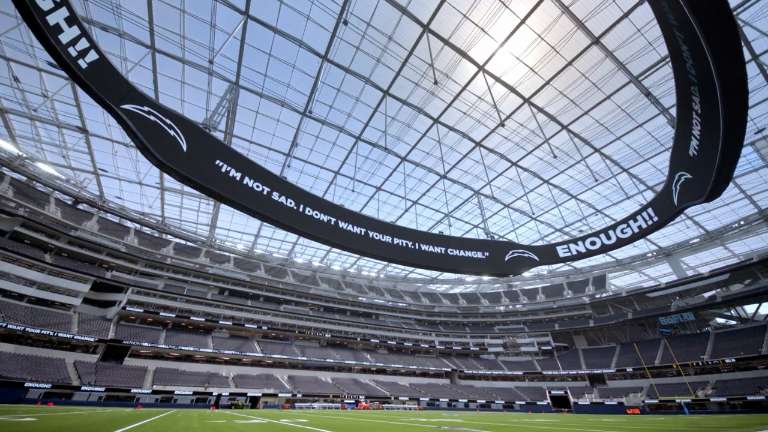 When the Chargers started their running back drill with just one bag on top of a couple of trash bins, it looked way too easy for NFL athletes. However, they kept adding more bags before eventually Austin Ekeler impressively cleared five bags on an explosive two-footed leap. Training camp can be grinding, but it looked like a fun-yet-competitive (and useful) drill for the backs. It was funny how Anthony Lynn held up Ekeler’s arm and called him the champion like he just won a 12-round boxing bout.

Most football fans watch Hard Knocks to get some insight on how things are going on the field, but Episode 4 focused most on off-field matters because of the Jacob Blake shooting. This qualifies as the worst moment from last night in part because it seemed like Anthony Lynn and many of the players wanted to hold their scrimmage, and the cancellation seemed tepid. Hopefully missing an important day of work isn’t something that comes back to hurt LA when the season begins.

The choice was easy here, as rookie defensive lineman Breiden Fehoko brought a ton of energy at the end of Chargers practice with a Haka dance, representing his culture. Fehoko almost looked like a Dothraki from Game of Thrones, and his teammates loved it.

The playing focus for the Chargers was on first-round rookie quarterback Justin Herbert, who had a subpar day of practice. After such a great start in camp, Anthony Lynn said that it was good for Herbert to struggle for a couple of days so that he can grow from it. The Oregon product responded and had an excellent practice that gained the attention of players and coaches. Pro Bowl cornerback Chris Harris Jr. was notably impressed with Herbert and the way he plays the position.

There wasn’t a ton of on-field action in last night’s episode, but rookie receiver Van Jefferson was a highlight for a Rams team that felt light on screen time. Sean McVay and general manager Les Snead are clearly impressed with the former Florida Gator, who was called a combination of all three current starting receivers for the Rams. Expect Robert Woods, Cooper Kupp, and Josh Reynolds to be the primary starters this season, but Jefferson provides excellent depth and will be ready to step into a large role at some point.

Shame on HBO for not showing whatever Tyrod Taylor said in the locker room. He’s the one that called everyone in.

Good to hear I haven’t missed anything.