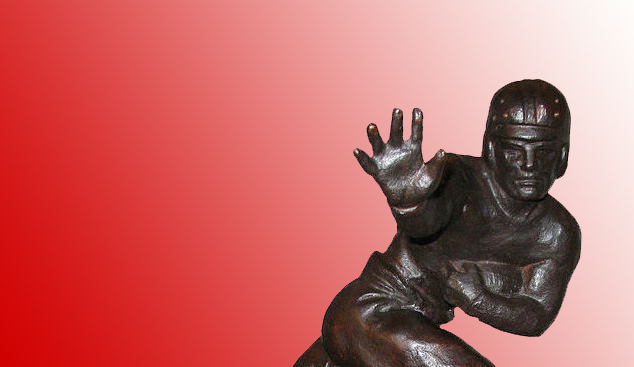 Day 9 of the 2019 Heisman Trophy candidate countdown focuses on a player from a team that struggled last season.

Nebraska is coming off a trying 4-8 campaign, but quarterback Adrian Martinez showed promise as a true freshman starter last season. This preseason, he’s one of the nation’s top Heisman candidates.

Martinez has the ability to total well over 4,000 yards and 40 touchdowns after totaling 3,246 yards and 25 touchdowns in 2018. Playing for Scott Frost, Martinez is simply in the perfect offense to have a ton of success while putting up eye-popping numbers. In Frost’s second season at UCF, his team made a huge jump forward and had an undefeated season, so his alma mater could have similar results in his second year at the helm; also, it helps that the Cornhuskers have seven starters returning on offense. Martinez might be the best quarterback in the Big Ten after experienced players left after last season. Nebraska has relatively low expectations after a four-win season, so the bar might be lower in terms of team success compared to other Heisman candidates expected to win their conference and be in the College Football Playoff.

The Big Ten remains a very difficult conference with teams more talented than Nebraska, which will make things tough even if Martinez is the most talented quarterback in the conference. There are other great players around the country that should also put up numbers and will likely enjoy more team success.

Nebraska must reach at least double-digit wins while Martinez dominates most weeks while adding Heisman-caliber moments in home matchups with Ohio State and Wisconsin.