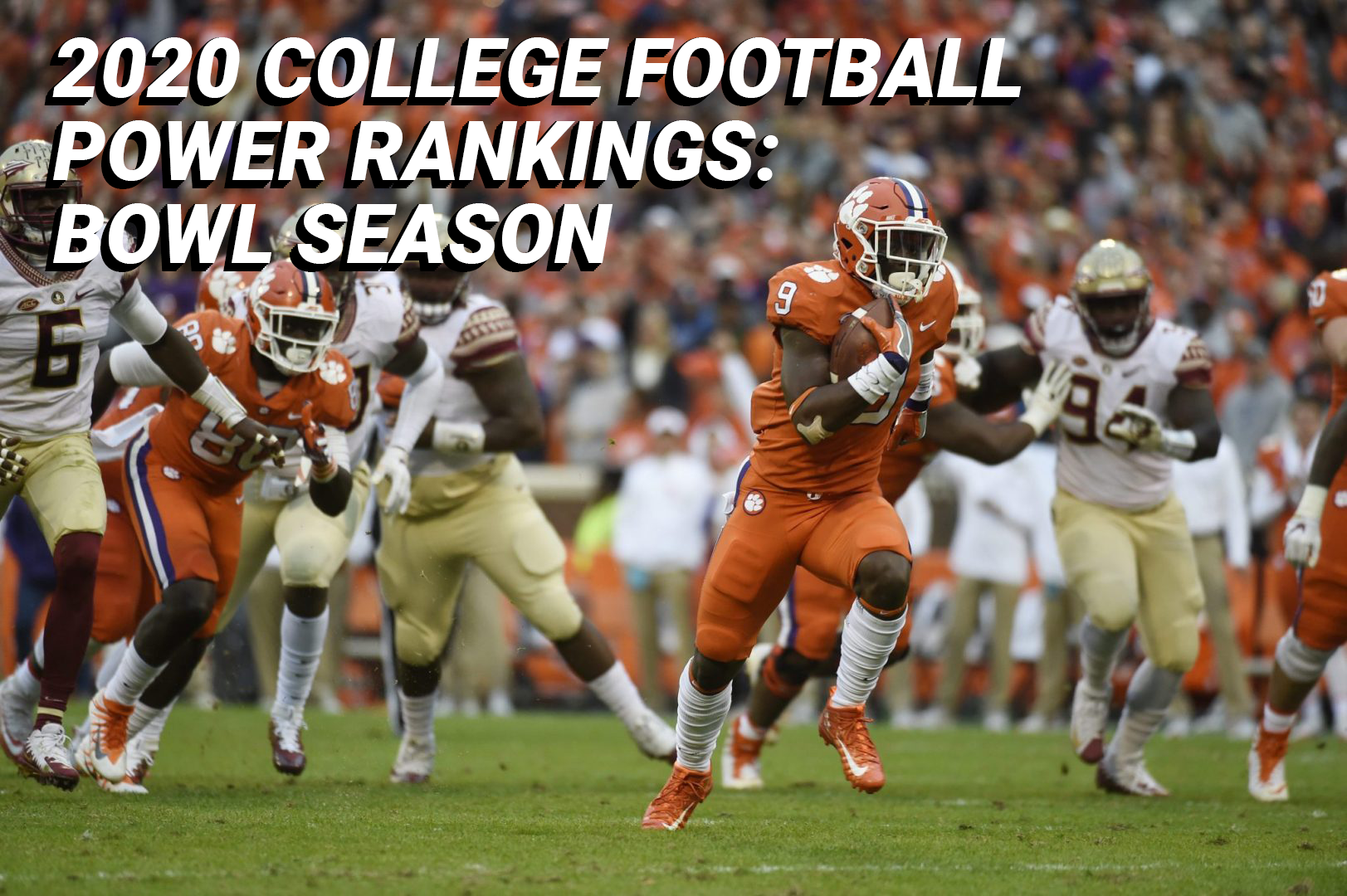 Mac Jones, Najee Harris, DeVonta Smith, and the Alabama offense put up big points to front run against Florida and win the SEC title for a perfect 11-0 mark ahead of the College Football Playoff. Nick Saban’s defense might not be completely dominant like in past years, but the offense is extremely difficult to stop, and the Crimson Tide are massive favorites for their CFP Semifinal versus Notre Dame.

At a neutral site with team leader Trevor Lawrence back under center and a healthier defense, the ACC Championship was a totally different contest than the first battle between Clemson and Notre Dame in South Bend earlier in the year. Lawrence was extremely impressive, and Dabo Swinney stated after the game regarding the Heisman that if you don’t know Lawrence is the best player in college football, “I don’t know what you’re looking at.” Most feel that Alabama and Clemson are on a collision course again.

We have Ohio State in the top four because they made the Playoff and have a shot at a national title, but we do not feel they should have been included in the CFP with just six games played. It’s “Ohio State” so they naturally got the benefit of the doubt from the Committee. However, they haven’t looked totally overwhelming and undeniably a top-four team for most of the season. And now, the Buckeyes get the benefit of being fresher, playing five fewer games this season when they face Clemson in the Sugar Bowl for a rematch of last year’s matchup.

We have Notre Dame at No. 4 in part because where they are in the CFP Rankings (and because it’s going to be a major task toppling Alabama), but they arguably should’ve been at No. 3 given they own a win over Clemson and have a stronger resume than Ohio State—but it makes sense not to want to see a back-to-back matchup and a third overall game between Clemson and Notre Dame before the national championship game. The Fighting Irish certainly had the resume to make the Playoff; now, they need to show they can get over the hump and at least be competitive in a huge postseason game, which they have been unable to do in recent years.

Jimbo Fisher stated his case, and it was a good one—Dabo Swinney even stated the case on Texas A&M’s behalf last week. The Aggies have serious beef about being left out of the Playoff, with their only loss coming to No. 1 Alabama and one of the top strength of records in the country. Personally, despite Ohio State being put at No. 3 here (partly because they are fresher and partly because of Notre Dame’s lack of Playoff success), we feel the CFP should have been Alabama, Clemson, Notre Dame, and Texas A&M.

People were pretty outraged that Cincinnati didn’t appear to get any serious College Football Playoff consideration, seemingly hitting a ceiling earlier this year and then going even lower than that in recent weeks. If there was a year to see what a Group of Five school could do in the Playoff, 2020 would be it. The Bearcats have an opportunity to face a Georgia Bulldogs team that’s played very well as of late, so they need to take care of business and show what could have been—it’d be pretty audacious, but perhaps they’ll even claim a national title like UCF did a few years ago.

Oklahoma claimed their sixth consecutive Big 12 championship with the 27-21 win against Iowa State in the conference title game, and the Committee rewarded the two-loss Sooners with the No. 6 spot in the CFP Rankings. Oklahoma has played very strong defense over the past six games, allowing point totals of 14, 28, 9, 13, 14, and 21. Facing a high-powered Florida offense will be quite the test for Lincoln Riley’s squad.

It’s a bit odd that the CFP Committee had Ohio State as a clear Playoff team at No. 3 but kept Indiana all the way outside the top ten. The Hoosiers are not in a New Year’s Six Bowl, instead playing unranked Ole Miss in the Outback Bowl on January 2. You can bet head coach Tom Allen will get his guys ready to go as they look to finish off their breakout season with a victory.

The SEC Championship Game played out as many expected it to play out. Florida’s offense led by Kyle Trask and an explosive group of weapons was able to move the ball and put up points on the Alabama defense, but the Crimson Tide attack had little trouble doing even more on the Gators defense. Despite three losses (it’s difficult to knock them much for losing by one possession in the SEC title game), Florida is ranked at No. 7 and will play in the Cotton Bowl.

Georgia had their final regular season game canceled, but they did enough throughout the year to get a New Year’s Six Bowl and will face Cincinnati in the Chick-fil-A Peach Bowl. Crowds aren’t a big factor like they might be in previous years, but the Bulldogs will benefit from playing in Atlanta as they look to represent the Power Five and end the Bearcats’ undefeated season.

Should’ve been A&M over OSU. Maybe even give Cincinnati a shot over ND because we know ND will get killed again. 1 Bama 2 Clemson 3 A&M 4 ND/Cinci

Dabo is wild man I love it.

Jamie
Reply to  Will Cooper