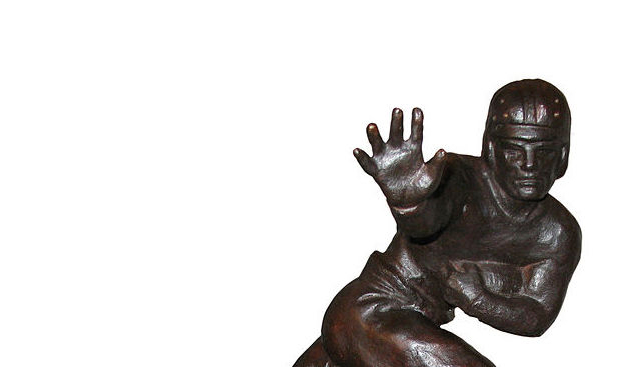 This crazy year certainly extends to the Heisman Trophy race, and this week has a bit of a shakeup with just one player that was in the top five last week in action.

Hopefully Alabama can find a date for its game against LSU, which would give Mac Jones an opportunity for another big win and to potentially pad his stats a bit more in a tight race. It’s close, but Jones remains the Heisman favorite over several other worthy options.

Kyle Trask has the most passing touchdowns through six games in SEC history (three more than Joe Burrow last year), and he just threw for six touchdowns against South Carolina without star tight end Kyle Pitts in the lineup. Keep in mind Trask is putting up these insane numbers in an all-conference schedule without the prototypical “cupcake” matchups.

Justin Fields has been very good this season, but he might need to start putting up more raw passing numbers to compete with Mac Jones and Kyle Trask throwing for huge yardage and touchdown totals this season. Fields has a prime opportunity to do some damage with a top-ten game versus Indiana this week.

The No. 4 and No. 5 spots are the toughest to rank right now, but Najee Harris won’t drop too far just because his game was canceled due to COVID. Harris should again rack up yardage and find the end zone at least once or twice against Kentucky on Saturday.

The preseason Heisman favorite has some ground to make up due to his two missed games (COVID-19), but he remains squarely in the Heisman mix as he gets set to return this Saturday. BYU quarterback Zach Wilson could easily get a top-five spot, but he just misses out as the Power Five contenders get the slight nod for now.