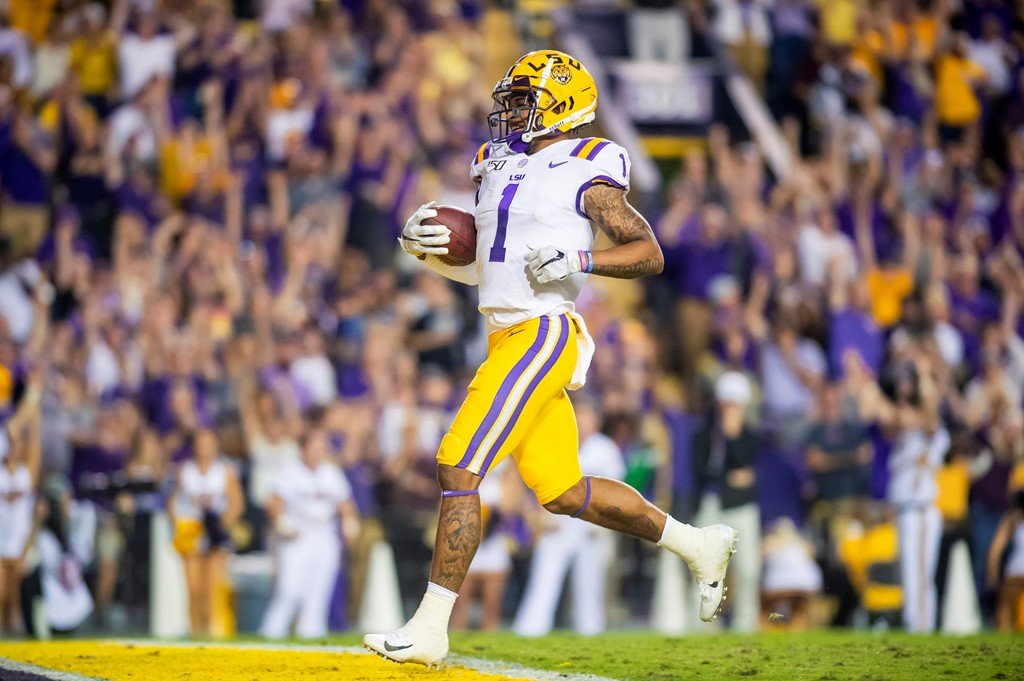 There is always a wrench that throws things into chaos early on, but my mock has multiple trades projected, and I try to use common sense as best I can while combining some of my own views on prospects. Enjoy!

Urban Meyer took the Jacksonville job because of the chance to coach Lawrence, but the rest of the draft is where the work will really begin; if the Jags are able to hit on their picks, contention in the AFC South could be possible as early as this fall.

Any debate surrounding Wilson has quieted down in recent weeks, and the Jets will be getting a playmaker with tremendous arm talent to hopefully turn the franchise around. Corey Davis, Denzel Mims, and Jamison Crowder is a quality trio at receiver to help make the transition easier on the young quarterback.

I know Justin Fields has been the Twitter favorite here, but he doesn’t really fit the personnel in San Francisco (underneath-to-intermediate targets), so the pick was always going to come down to Jones or Trey Lance for me. The Niners getting ripped by Josh Allen last December is the main thing that causes hesitation, but Jones will be the accurate distributor Kyle Shanahan wants to run his offense.

The top of the draft almost seems too predictable this year, which could mean there is something to Pitts’ personal belief that four quarterbacks will go to kick things off.  However, it might have just been him not wanting to get his hopes up, and my money is on head coach Arthur Smith getting his way by sticking with Matt Ryan and giving him another big-time weapon.

Chase versus Penei Sewell is a debate that could rage on for years, but the Bengals seem to be leaning towards reuniting their franchise quarterback with his top target at LSU. If so, Burrow would have a group similar to his Heisman campaign with Tyler Boyd in the Justin Jefferson role and Tee Higgins in the Terrace Marshall Jr. role.

Talk of Sewell cross-training at right tackle (potentially to protect the blindside of left-handed Tua Tagovailoa) combined with yesterday’s trade of Ereck Flowers is enough smoke to slot the 20-year-old here. This feels like a true tossup between Sewell or one of the Alabama wideouts.

I find it difficult to believe New England will enter 2021 with basically the same quarterback room that they had in 2020, and Lance—in striking distance of a trade up—is the closest they might ever be able to get to their version of Patrick Mahomes or Josh Allen. Limited experience is a concern, but intelligence and athleticism are top-tier attributes for Lance.

Chicago has to be the franchise most desperate for a quarterback, and the dual-threat ability of Fields will give them a better shot at competing than Andy Dalton would. I just wonder if ownership is OK with general manager Ryan Pace mortgaging the future for the fifth signal-caller off the board.

Speed kills, and it’s worth noting that Waddle is now a significant favorite (-175 via FOX Bet) to be drafted ahead of teammate DeVonta Smith tonight. Miami could sit back and hold all their draft capital, but they have enough premium picks to get one of Tua’s former teammates.

Talk of Jaycee Horn has picked up steam, but I go back to Surtain II—who I compared to Nnamdi Asomugha—being a better scheme fit for Dan Quinn’s defense. Pairing up the rookie with former Crimson Tide teammate Trevon Diggs at corner should eventually give Dallas one of the NFL’s top perimeter duos.

In my opinion, the Giants are one of the best drafting teams in the league, and this is a dream scenario for them with Smith falling outside the top ten. Daniel Jones would be primed for a huge leap in Year 3 with Smith, Kenny Golladay, Sterling Shepard, Darius Slayton, Evan Engram, Kyle Rudolph, and—of course—Saquon Barkley around him.

I am much less confident in this pick than I was just a few days ago, as Kwity Paye or Rashawn Slater feels more like a prospect Howie Roseman might take that further enrages the fanbase. However, Horn fills a significant need across from Darius Slay, and his competitiveness is a definite fit in Philly.

If the Dolphins don’t end up drafting Penei Sewell, I would anticipate Los Angeles being a team that looks into moving up to give Justin Herbert his college left tackle. By staying put, the Chargers get a versatile and technically-sound option in Slater.

Offensive tackles have been connected to the Vikings, but Mike Zimmer will go crazy if his defense plays like it did last season, and Paye can bookend a long-term tandem with Danielle Hunter on the edge. For those who believe quarterback might be a possibility, I’d say Trey Lance is the only one they might consider, and it’d take a slip to No. 14.

Parsons is a tough player to peg because of some past character concerns, but he would bring the kind of violence a new regime in Detroit wants on defense. I’d bet Dan Campbell and Chris Spielman would both be on board.

Cleveland’s roster is strong enough that they can trade up for a particular prospect to fill a missing piece, while the Cardinals could recoup some draft picks by moving down (they don’t have a third- or fourth-round selection). Barmore is a great fit to provide pass-rush juice from the interior.

Owusu-Koramoah is one of my favorite players in the draft, and his ability to cover should put him towards the top of the board for Las Vegas as a chess piece in Gus Bradley’s defense. This selection would keep in line with Jon Gruden and Mike Mayock drafting prospects from big-time programs.

The athleticism, size, and range of Collins could make him a top-20 pick, and Denver could be a candidate to move back with quarterback no longer looking like an option after acquiring Teddy Bridgewater to push Drew Lock. At some point, linebacker should be a priority for more help against Travis Kelce and Darren Waller in the division.

Darrisaw could be long gone by the time Washington is on the clock, but if not, they should jump at the opportunity to draft him as their answer at left tackle. For me, the gap between Penei Sewell and Darrisaw is smaller than the one between Darrisaw and the rest of the class.

Perhaps the biggest wild card in the first round, Farley could fall all the way to Day 2 if teams aren’t comfortable with his back issues. By moving down and acquiring more assets, though, Carolina can keep their defensive-minded draft approach from last year going with a true potential impact corner.

The three paths for the Colts here would seem to be left tackle, edge defender, or a trade back, and Leatherwood likely checks all the boxes for Indy considering his experience at Alabama combined with elite athletic testing. This could be the prime spot for New Orleans to move up if Caleb Farley is available.

People might scoff at a team trading up for a running back, but Etienne would be a home-run pick for Buffalo to bring A+ speed and pass-catching ability to the backfield. Brandon Beane has valued running backs enough to spend a third-round pick at the position in back-to-back drafts.

The betting markets have been a few spots higher on Vera-Tucker’s stock, but this has felt like a fit for me the entire draft cycle, as Joe Douglas would get a high-quality left guard to play next to Mekhi Becton. It’ll be interesting to see how the team balances supporting Zach Wilson versus adding defenders for Robert Salah.

Pittsburgh squads of the last decade were at their best with Le’Veon Bell creating a balanced offense, and Harris can do a lot of the same things as a bigger runner with tremendous receiving skills. I think the only thing stopping Harris to the Steelers might be Miami staying at No. 18 to pick him.

It hasn’t gotten the buzz of Harris-to-Pittsburgh, but Moehrig-to-Jacksonville is another pairing that seems to be popular at the end of Round 1. The TCU product would bring range and versatility to a defense that is looking for more out of their young players in 2021.

The Cardinals have defended D.K. Metcalf better than anyone over the past two seasons (six receptions for 75 yards and one touchdown in four matchups), but Patrick Peterson is gone, and a big corner is now missing on the depth chart. Campbell has the length and speed to continue making it a challenge for opponents on the outside.

Assuming the medicals check out due to some apparent knee issues, Ojulari would be a great fit in Baltimore’s defense as an ascending pass rusher that also plays the run at a high level. I’m not sure a receiver—at least in the first round—should be a priority for the Ravens’ run-first offense.

We’ll see if the Saints end up making a move for Caleb Farley, but Samuel Jr. wouldn’t be a bad fallback option by any means with a fiery game and the skillset to defend the slot. He might be someone that can be used to cover Antonio Brown in battles with the Buccaneers.

Expecting the Packers to draft a wideout after they declined to take one last year in a historically deep class might be a mistake, but it could help ease some of the re-emerging tension with Aaron Rodgers, and Bateman knows how to uncover. In his sophomore season (before last year’s COVID-impacted campaign), Bateman caught 60 passes for 1,219 yards (20.3 yards per receptions) and 11 touchdowns.

I selfishly hope that Atlanta is dumb enough to trade Julio Jones so we get an offense with Derrick Henry, A.J. Brown, and Julio—which would be perhaps the three best “takeover” players in the game. But that might be more of a pipe dream, and instead of Brown playing with his idol, he can play with his former college teammate in Moore.

DeShon Elliott played well as a 16-game starter at free safety last year, but Grant would be more of that rangy centerfielder-type that can take the ball away. I also wouldn’t be surprised to see Baltimore draft Northern Iowa offensive tackle Spencer Brown as an immediate replacement for Orlando Brown Jr.

Jaelan Phillips notably wasn’t selected in this mock, but concerns about injury history—especially since COVID caused him to miss the medical rechecks this month—and overall commitment could lead to a slide. If that’s the case, Rousseau would have a chance reclaim the top spot among Hurricane standouts by being drafted as a future replacement for Jason Pierre-Paul in Tampa Bay.

Am I crazy for thinking a lot of this might happen?