WOLF SPORTS ALERT No sports is no fun, but we will continue to bring you content as we await their return. Also, please check the link under All Things Fresh. Thank you.
Home / frontnfl / Jonathan Taylor Is Worth An Early Selection In The 2020 NFL Draft 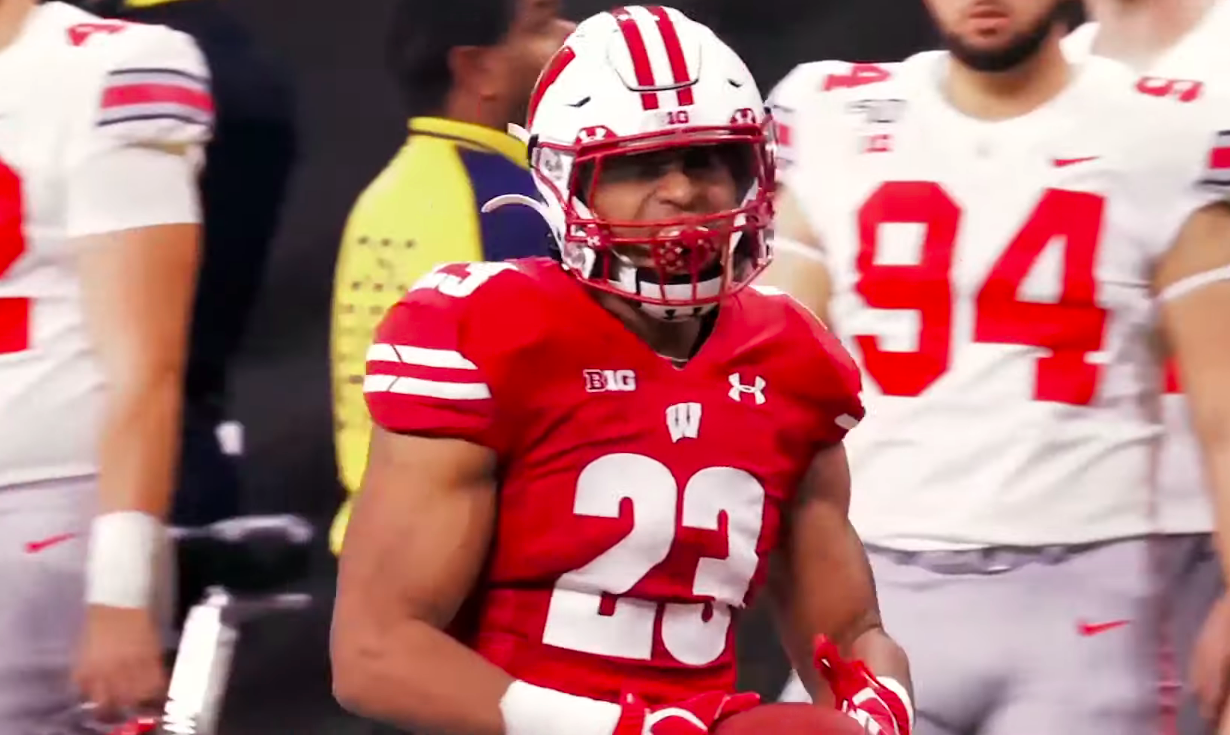 Every year, there seems to be at least one player that is clearly a top-tier prospect but does not get the recognition as such in the media or around the league. Last year, I had several favorites—Josh Allen, Daniel Jones, Christian Wilkins, Dexter Lawrence, Deandre Baker, and a few of the receivers (A.J. Brown and D.K. Metcalf were home runs, but we haven’t seen Hakeem Butler on the field yet). But more notably, Deshaun Watson and Lamar Jackson were both criminally underrated entering the NFL.

Maybe it’s been luck that guys I have been high on have panned out, but there are a couple of 2020 prospects I would bet become stars at the next level that—similar to Watson and Jackson—are not getting enough positive regard ahead of the draft.

From what I’ve seen elsewhere, Wisconsin running back Jonathan Taylor is viewed as mostly a Day 2 prospect. I have not seen a draft analysis have him ranked as the No. 1 back in this year’s draft, which I believe is a mistake. Not only that, but Taylor should be considered a top-ten prospect similar to Saquon Barkley, Christian McCaffrey, and Ezekiel Elliott in the past few years.

The 2020 running back class is an excellent group—D’Andre Swift is seen as the consensus No. 1, and it’s hard not to get excited about his potential after he immediately burst onto the scene as an instant-star true freshman at Georgia behind Nick Chubb and Sony Michel. However, Taylor has shown that he is an elite prospect that’s been overlooked throughout the pre-draft process.

Looking at Taylor’s game, it’s difficult to see why he isn’t considered a surefire first-round selection. It’s popular to place a lower value on running backs today, but I don’t think that’s the issue—people simply aren’t seeing Taylor’s rare ability for whatever reason.

Taylor had one of the greatest careers in college football history, rushing for 6,174 yards and 50 touchdowns in just three seasons—with back-to-back 2,000-yard seasons as a sophomore and junior (and he had 1,977 rushing yards as a true freshman in 2017). In his final season with the Badgers, he showed his ability as a receiver with 26 receptions for 252 yards and five touchdowns after limited usage there in his first two years. Keep in mind, Taylor did this in the Big Ten. The numbers are obviously sensational, but let’s get to Taylor’s on-field work.

Starting with Taylor’s ability to finish drives with touchdowns, the 226-pound runner shows patience behind the line of scrimmage, but he knows when to hit the hole and get into the end zone with power:

Against Kent State last season, when he had five touchdowns, Taylor showed his vision while setting up his blocks before coasting into the end zone.

Taylor’s blend of power and vision can help make him a premier touchdown-maker at the next level. Here, Taylor’s vision pairs with his acceleration to turn up on a dime and dart into the end zone:

The one-cut ability paired with track speed (at a 225-to-230-pound frame) allows Taylor to also be a threat to take it the distance every time he touches the ball:

For some reason, Taylor’s 4.39 40-yard dash time at the NFL Combine shocked people, but anyone that watched him play and knows his track background should not have been surprised by his time. It’s good to have different opinions about prospects to avoid groupthink, but it feels like the opposite has happened with Taylor and that people are blind to his ability due to groupthink. I know this isn’t the case for many draft analysts (those on NFL Network, for example), but it almost seems like no one actually watched him play.

Something I really like about Taylor is that he does it all as a runner: speed, power, explosiveness, vision, quickness. There are a number of plays where he showcases his all-around skillset, but here are a couple of examples from the Iowa game last year:

First, Taylor runs north-and-south to get to the second level. He then utilizes a quick spin move to evade a would-be tackler and then races for more chunk yardage. Later, he sheds a tackle with ease and then shows his smoothness in the open field down the sideline. Taylor transitions from power to smoothness comfortably.

As a receiver, Taylor showed he can be used in a variety of ways. First, it looks like he’ll be able to become a real weapon in the flat off play-action, which can be a considerable benefit for an offense:

While it didn’t lead to a huge gallop or touchdown, this angle route shows his capacity to run routes in middle of the field and keep defenders honest. Taylor can run two-way-go routes in the NFL:

And, as high as I am on him, even I was even surprised by Taylor’s touchdown catch on a deep wheel route against Minnesota last year:

Finally, in the Big Ten Championship Game last season, Taylor was arguably the clear best player on the field against Ohio State, helping Wisconsin jump to an early lead.

Taylor set the tone in a huge game. While it didn’t lead to a win against a juggernaut, the talented runner was a clear difference-maker for his team.

And here, he throws two stiff arms before again showing craftiness while gliding in the open field—against exceptional athletes—to pick up extra yardage:

The lone concern for Taylor is fumbles, but players throughout league history have shown the issue can be correctable. Also, while Adrian Peterson has had some fumble issues in the NFL, no one would deny Peterson is one of the greatest running backs of all-time. Fumbles aside, when you consider everything that Taylor does extremely well, it’s difficult not to be very high on him as a top running back prospect.

Taylor set FBS records for the most rushing yards through his freshman season (1,977), sophomore season (4,171), and junior season (6,174), as well as a record twelve 200-yard rushing games. Emmitt Smith might not have to worry too much, but Taylor has the potential to continue breaking some records as a superstar running back at the next level.

He’s more of a 2nd round pick because he isn’t that fast like Swift and Dobbins.

Do you read or watch?

What are you talking about?

Running backs do not matter.