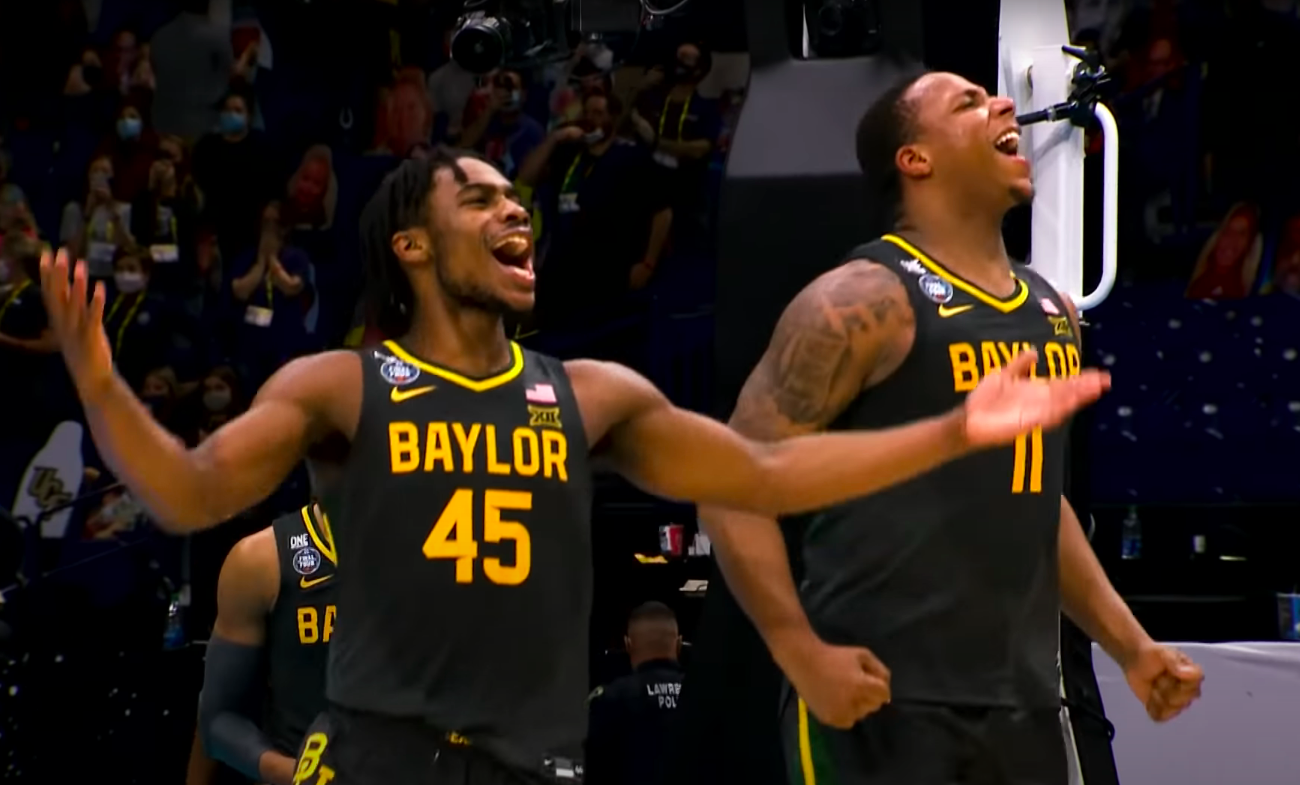 The 2021 NCAA Tournament is in the books, and thankfully we got an awesome few weeks after missing out on the tournament entirely last year due to the pandemic. Today’s Top Ten Tuesday highlights the best moments from the tournament following the Baylor Bears claiming the title last night. Also, you can watch the annual One Shining Moment recap here.

The toughest challenge of the tournament for Baylor probably came against Villanova in the Sweet Sixteen. The eventual national champions were down at halftime, and the final score was not an indication of how close the game was at the end. But the Bears advanced, and the rest is history.

With a very late East Coast start time in the first round on Saturday night, many people woke up to the shocking news the No. 3 seed Texas was eliminated by Abilene Christian. Joe Pleasant hit two clutch free throws in the final seconds to help ACU pull off the upset.

Rutgers was coming off its first tournament win since 1983, and they put Houston on the ropes in the second round of the tourney. A tough and-one tip-in from freshman Tramon Mark put the Cougars ahead with 24.1 seconds to go, and they got a defensive stop to seal the victory.

The magic for Syracuse ended in the Sweet Sixteen, but Buddy Boeheim (son of legendary head coach Jim) lit it up in the first two rounds for the No. 11 seed Orange. Boeheim hit 13 three-pointers in the first two games, and a great video of a young Buddy in the locker room with former ‘Cuse star Carmelo Anthony during the 2003 title run emerged.

The first one-seed to fall in the tournament is always noteworthy, and Loyola Chicago—with the backing of Sister Jean—went on another tournament run this year by knocking off in-state adversary and No. 1 seed Illinois in the second round.

But the most stunning upset from the always-eventful first couple of rounds of the NCAA Tournament was undoubtedly No. 15 seed Oral Roberts shocking No. 2 seed Ohio State and immediately busting the many brackets with the Buckeyes in the Final Four.

UCLA ultimately survived against Alabama, but Alex Reese hit an ice-cold three with 0.4 seconds remaining to send the Sweet Sixteen matchup to overtime. Reese being a senior that saw his role decline a bit this season made the moment even more special.

However, the Zags survived the effort by the Bruins thanks to freshman Jalen Suggs hitting an insane buzzer beater off the glass. This moment easily could have been No. 1, and it will live on for years despite it not eventually leading to a championship.

From the start, despite being underdogs entering the night, Baylor was clearly the most talented and the better team in the title game. The Bears were super deep, they got toughness and key plays from their big men and forwards, and their guards could all score at ease. And the defense was an absolute thrill to watch, playing like one of the best units in history. The dominance, defense, and talent—while preventing a perfect season by Gonzaga—should make Baylor one of the most memorable NCAA champions.

That Houston win over Rutgers was crazy.