WOLF SPORTS ALERT No sports is no fun, but we will continue to bring you content as we await their return. Also, please check the link under All Things Fresh. Thank you.
Home / fronttechnology / Backyard Baseball Anniversary: Ranking The Game’s Best Characters 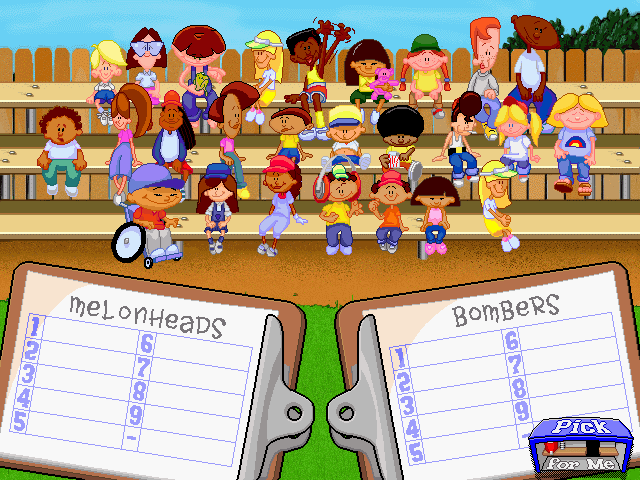 21 years ago, the original Backyard Baseball game was released for Microsoft Windows and Macintosh. The game was wildly popular and probably delivers nostalgia for a lot of people that played it a couple decades ago—you might remember popping in the CD-ROM to play. In honor of the 21-year anniversary, these are my picks for the best ten players in the original Backyard Baseball.

Strictly a pitcher that could swing the bat, Angela “Sugar Pop” Delvecchio couldn’t run and couldn’t field. But when she was on her game with enough juice in her juice box on the mound, there might not have been a pitcher more frustrating to hit against. Delvecchio didn’t blow hitters away with gas, but she used her pitchers and hit her spots.

Vicki Kawaguchi couldn’t hit, but she’s good at everything else. She isn’t quite the pitcher her brother Kenny is, but she’s well above average there. In the field, Vicki could cover a ton of ground and make plays like a vacuum in the outfield or at one of the two middle infield spots. And while she wasn’t going to threaten for a home run, “Swan” could get on base with bunt attempts.

The baseball card for Ernie Steele (A.K.A. “Funnybones”) says “everyone loves Ernie because he is so silly.” You don’t want a bunch of jokers on your team, but a well-liked player like Ernie could help bring a group together. Steele is just adequate at hitting and running, but he’s an elite fielder that can step in and do a good job on the mound as a reliever.

Mikey Thomas was extremely slow—perhaps the slowest in the game—which made him a potential liability on defense. Ideally, you would hide him at right field and hope not many balls head in that direction—he does have a great arm, so he could throw people out on the basepaths, and a good centerfielder could track down balls in the gap that Mikey can’t get to in time. As a hitter is where Thomas shines, as he could hit moon shots without needing an aluminum bat.

Achmed Khan wore headphones and listened to music while he played, but it didn’t matter—he arguably had the biggest power swing of any Backyard Baseball character. “Axeman” would just go to work when it was his turn to bat, and the nickname indicates he preferred a down-on-the-baseball approach instead of using a launch angle to hit his bombs.

If you have the nickname “MVP”, you better be good at sports—and Jocinda Smith is certainly good at baseball. Smith is said to have the “best swing in town,” but she didn’t seem to have as much pop as some of the other maxed-out hitters in the neighborhood. Basically, Smith was a technically-sound, all-around player that’ll do her job.

Kiesha Phillips is described as “the neighborhood clown,” which probably leads to more swing-and-misses than you’d like to see from someone with so much skill. However, Phillips has a ton of power—only matched by only a few other players—and her ability to cover ground in the outfield (she’s nicknamed “Flash”) makes her one of the best players to build a lineup card around.

Do not overlook Kenny Kawaguchi just because he’s in a wheelchair. “K-Man” is an all-around baseball player and probably the best pitcher of anyone, as the nickname indicates. Kawaguchi might not have as much pop at the plate as others, but he is a very good option in the bottom half of batting lineups.

Nicknamed “Wheelie”, the name fits for Pete Wheeler, who is a little slow in the mind but not slow in athletic ability. Wheeler’s Backyard Baseball card calls his swing “legendary” if he makes contact, as his power rivals anyone in the game. The fastest of the characters probably has the most natural ability of anyone; he’s not in love with baseball like the top player on the list, but he makes amazing things happen for his team without even realizing it.

Pablo Sanchez doesn’t speak a lick of English, but that doesn’t affect his ability on the diamond. He’s an elite five-tool player that’s arguably the best contact hitter, power hitter, fielder, and baserunner of all the kids. In a pinch, the “Secret Weapon” can get on the bump and dominate there, too. The multi-sport athlete has small shoulders, but he can legit carry his team to victory, and his legendary presence makes his squad the favorite no matter who the other eight players are. His theme song is even the best. Pablo Sanchez is the greatest sports video game character of all-time.