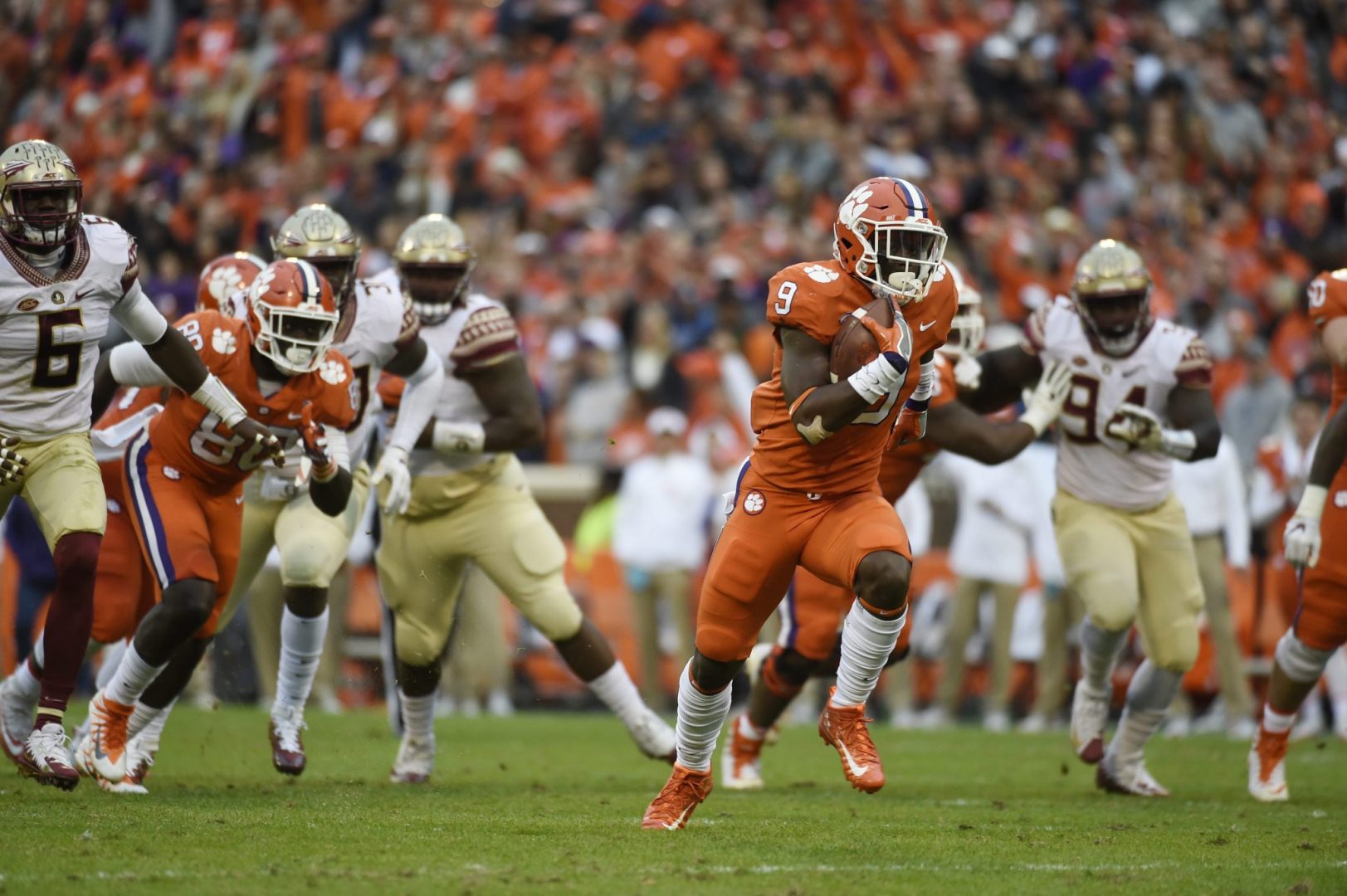 A memorable college football season ends tonight with the College Football Playoff National Championship Game between the Clemson Tigers and the LSU Tigers. Both teams are undefeated and have shown the heart of a champion over the past several months, and we should get a spectacular game as they both look to finish their epic seasons at 15-0.

Tale of the tape

While LSU had a very difficult SEC schedule and an early-season win over a then-top-ten Texas team in Austin, both Tigers squads earned their 14-0 marks—this is a matchup of two legitimate powerhouse squads, and the winner tonight could be in the discussion among the greatest college football teams in history.

Offensively, both Clemson and LSU are absolutely stacked. We’ll get to the quarterbacks for both schools, but Clemson has two towering six-foot-four receivers in Tee Higgins and Justyn Ross on the outside, a tough complementary guy in Amari Rodgers over the middle, and one of the nation’s most explosive players in track-speed, home-run-hitting workhorse Travis Etienne at running back.

The SEC’s Tigers have one of the most underrated players in college football at running back, Clyde Edwards-Helaire, who was limited in the Peach Bowl but should be ready to go for the national title game. At receiver, LSU’s playmakers have been a huge reason for the team’s record-breaking success this season. Receivers Ja’Marr Chase (1,559 yards, 18 touchdowns), Justin Jefferson (1,434 yards, 18 touchdowns), and Terrace Marshall Jr. (625 yards, 12 touchdowns despite missed time due to injury) as well as tight end Thaddeus Moss (534 yards, two touchdowns; son of Randy Moss) are an NFL-caliber skill group. The receiving corps paired with the addition of former New Orleans Saints assistant Joe Brady to long-time offensive coordinator Steve Ensminger made LSU almost unstoppable throwing the ball around this season.

However, if a team can limit LSU’s offense, it might be Clemson. Despite losing four outstanding defensive linemen from last year’s national championship roster, the Tigers have remained exceptional on defense, allowing just 11.5 points per game (best in the country) this year. LSU has faced more difficult opponents, but their defense has been inconsistent throughout the year, so it would be interesting to see how they hold up if their own offense can’t dominate like they usually do.

With Heisman Trophy winner Joe Burrow projected to go No. 1 overall in the 2020 NFL Draft out of LSU, and Trevor Lawrence almost a lock to go No. 1 whenever he leaves Clemson (2021 or 2022), tonight is likely to be a matchup of two future top picks in the NFL draft. Burrow shattered SEC records with his 5,208 passing yards and 55 touchdown passes (six interceptions), and his natural feel for the game and his all-around ability in and outside of the pocket—while having elite weapons to spread the ball around to—is a headache for opposing defenses.

Meanwhile, Lawrence hasn’t lost a game since high school and has a realistic chance to go unbeaten in his college career given the dominance of Clemson, which would be absurd—but tonight, against another undefeated team, could be the toughest test in two seasons. Like Burrow a few times this season, Lawrence showed the ability to take over with his legs and do whatever it takes to win games during the Fiesta Bowl a couple of weeks ago. Both quarterbacks are uncommonly cool under pressure, and their play could make tonight a game where the team with the ball last wins.

A likely top-ten pick in this year’s NFL draft, Isaiah Simmons is an awesome chess piece for defensive coordinator Brent Venables and the Clemson coaching staff to utilize all over the defense. Simmons can wreak havoc on all three levels of the defense, and he always seems ready to make a game-changing play. The Tigers might use him as a spy to contain Burrow as a scrambler in key situations.

Ja’Marr Chase and Justin Jefferson get a lot of the headlines, which isn’t surprising for a duo that has 18 receiving touchdowns a piece in 2019. However, as Clemson certainly knows, Terrace Marshall Jr. can also do a ton of damage to a secondary (80 yards and two touchdowns in the Fiesta Bowl), and it’s difficult to stop a third receiver as talented as him. Safety Grant Delpit could be the X-factor on the defensive end for LSU.

Ed Orgeron and Dabo Swinney have both done a tremendous job this season, and both LSU and Clemson are undoubtedly deserving, championship-level teams that could run through the competition most years—they just so happen to meet as heavyweight 14-0 competitors tonight. Swinney is using a Rocky analogy, framing his Tigers as Rocky going up against Ivan Drago in Russia (New Orleans, a huge homefield advantage for LSU), and I think that extra motivation as underdogs could help push Clemson to their third championship in four seasons.