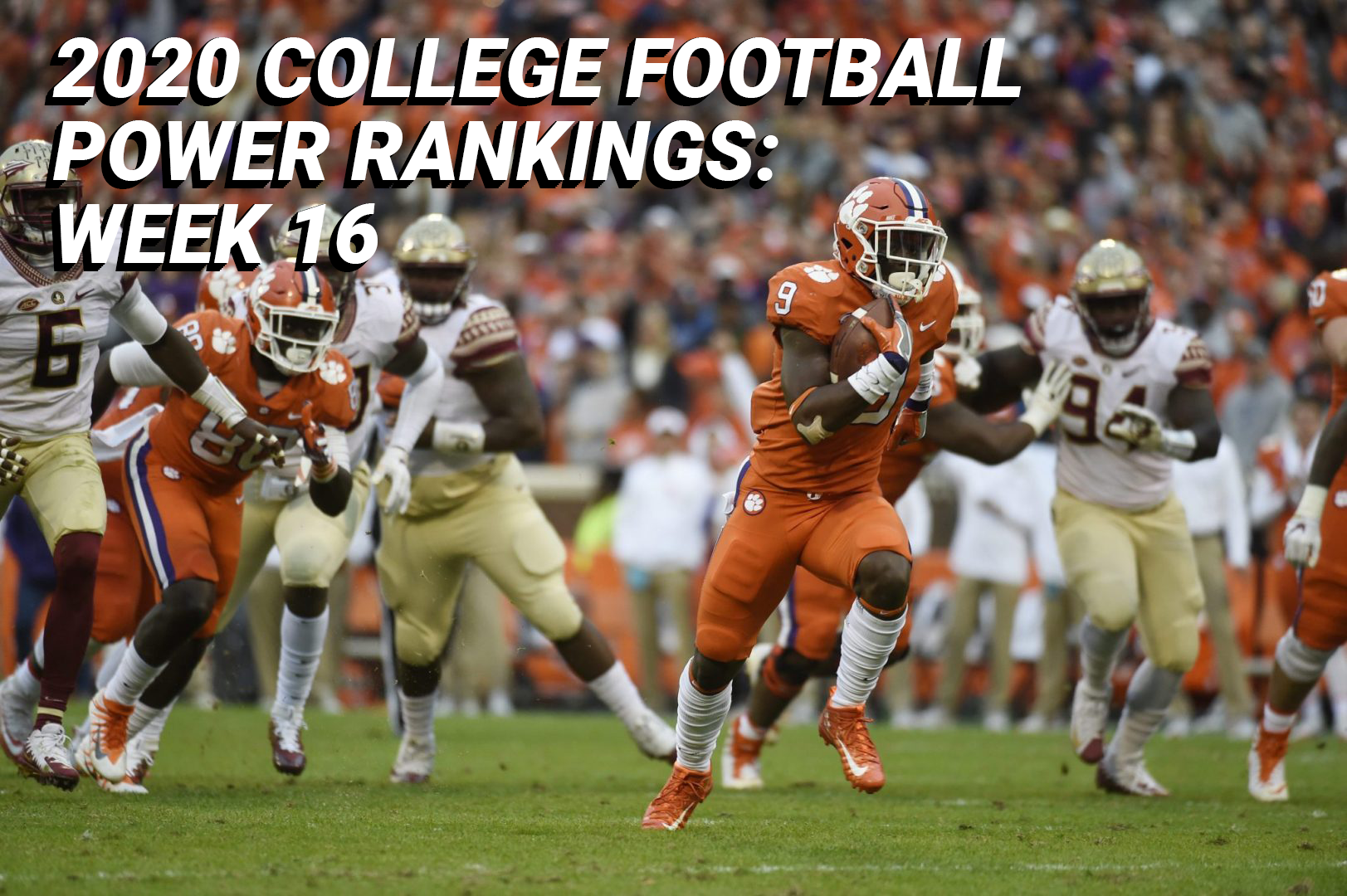 There were many cancelations last week due to COVID-19, but we still got a stunning top-ten upset ahead of conference championship weekend.

The game was 3-3 early and then all Alabama from there in the 52-3 win over Arkansas. The Crimson Tide scored five touchdowns on the ground and none through the air, but star receiver DeVonta Smith got on the board anyway with a long punt return touchdown. Nick Saban has his team rolling heading into the SEC Championship Game.

Have Alabama and Notre Dame already earned spots in the College Football Playoff? A blowout loss this weekend would probably mean no, but a close game in both cases might mean they are still a top-three team in the final rankings ahead of bowl season. Experienced quarterback Ian Book and the team have plenty of confidence heading into Saturday after a home win against Clemson earlier this season.

Clemson is obviously in a win-and-in scenario for the College Football Playoff for this Saturday’s ACC title game. The Tigers will have quarterback Trevor Lawrence and a healthier defense this time around versus the Fighting Irish, and we’ll see if star running back Travis Etienne can get going after Clemson couldn’t get anything going on the ground in the first matchup.

Things were out of their control, and it’s a shame they were unable to play in the big rivalry game against Michigan, but Clemson head coach Dabo Swinney makes a great point about Ohio State and the College Football Playoff. We saw what just happened to Florida; playing fewer games means a slimmer chance for a slip-up than teams playing close to a full schedule. They stay at No. 4 for now here, but an easy case could be made that the Buckeyes should not be in the Playoff.

Texas A&M has played in just eight games this season, but their only loss comes to Alabama. It would’ve helped if they were able to play Mississippi last week and maybe put up some style points, but the Aggies might be in the driver’s seat for a fourth Playoff spot with a couple of paths—a Clemson loss or the Committee leaving out the Buckeyes.

COVID-19 makes things more difficult, but Cincinnati likely would have benefitted if they could have gotten a key non-conference game on their schedule and win it—still, Florida’s loss could be what the Bearcats needed for a realistic shot at the Playoff. They’ll face Tulsa this Saturday and see where they stand if they can improve to 9-0.

Indiana is yet another team that did not play last weekend due to COVID-19, so they are in a similar spot to Ohio State—though with much more distant Playoff chances. Head coach Tom Allen feels his team is clearly a top-ten squad, and the close loss to Ohio State might normally keep them in the mix. The Big Ten dragging its feet on the season puts its members in a difficult spot in terms of an even playing field in CFP Rankings.

You could argue Florida was looking ahead to the SEC Championship, but LSU deserves credit for playing their best game of the season on Saturday night. Things will now be incredibly interesting if Florida wins the SEC as a two-loss team—it actually might not be enough to get into the Playoff, but who knows what the Committee would do in that situation? The Gators must play an outstanding game to beat the Crimson Tide, but Kyle Trask and the offense should be able to score with anyone—the defense will probably need to come through with a game-changing play or two.

With J.T. Daniels playing very well and the offense putting up excellent numbers over the past few weeks, Georgia has arguably looked like a totally different team since their loss to Florida. It’s too late for a Playoff bid, but the Bulldogs—who play winless Vanderbilt this Saturday—will be a tough opponent in whichever bowl they ultimately get.

5-0 USC has a case for the No. 10 spot after yet another comeback victory, but Coastal Carolina has played 11 games and survived against Troy to remain undefeated. The Chanticleers can get another ranked win this week as they look to secure a strong New Year’s Six Bowl.

I vote OSU out. Good team but need to play more than six.