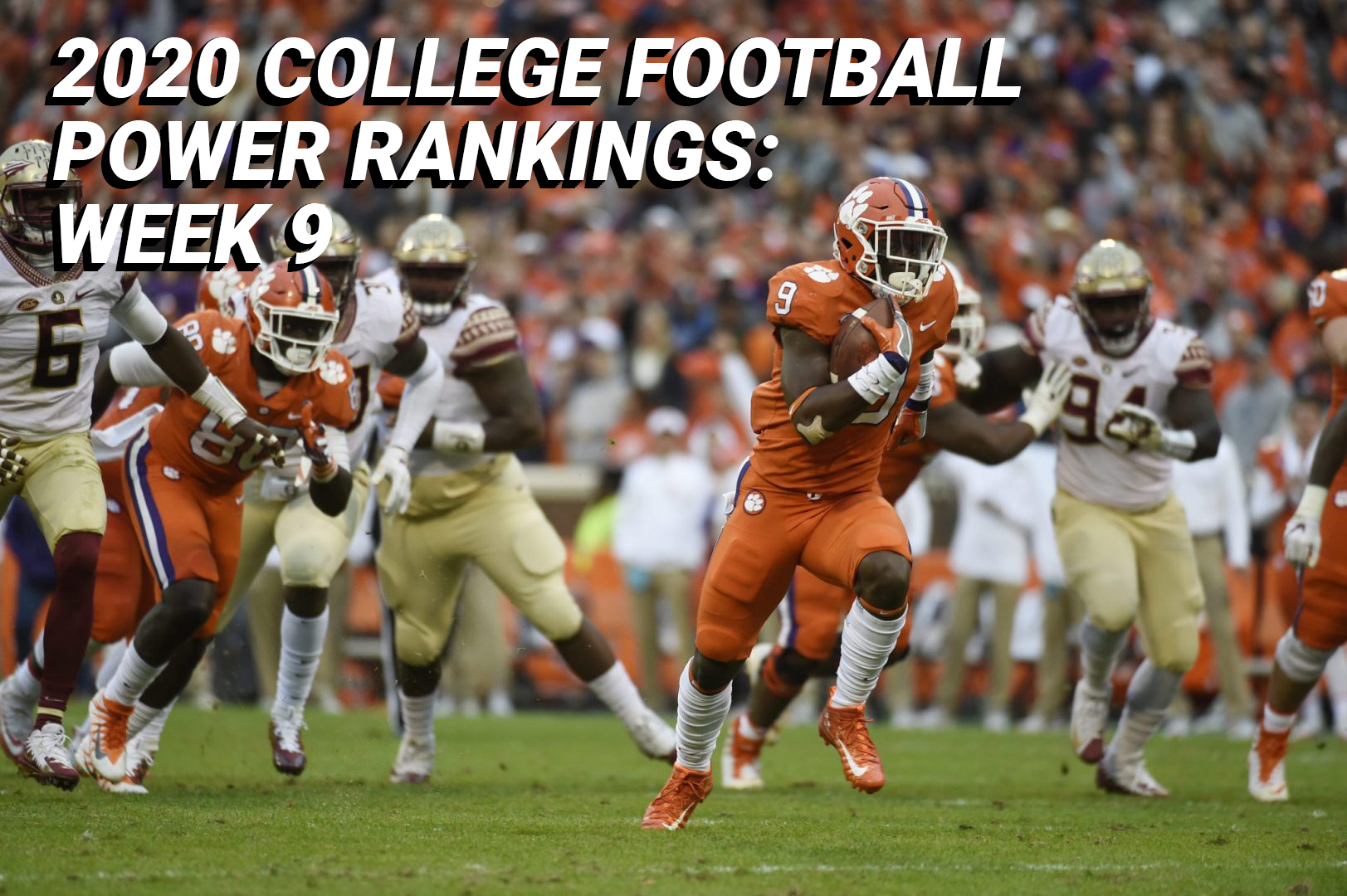 We are still awaiting the Pac-12’s return, but the top ten of this week’s college football power rankings finally had all ten teams that have at least been on the field this season.

Syracuse hung around for much of the game, but Clemson pulled away and won by nearly four touchdowns on Saturday. Dabo Swinney was not a fan of negative questions from the media framing a game that they ended up winning handily as some super disappointing performance—Dabo is a positive person, and that helps get his players to buy in. The Tigers might silence any doubters with a great performance this Saturday against Boston College.

There was no letdown for the Crimson Tide after their huge win over Georgia a couple of Saturdays ago. Alabama surprisingly didn’t throw any touchdowns in the 48-17 victory over Tennessee, but Mac Jones was 25/31 and threw for 387 yards. The loss of ultra-fast receiver Jaylen Waddle to a broken ankle is a very tough blow, and we wish Waddle the best of luck on his recovery.

While the performance didn’t feel that overpowering, Ohio State rolled up 52 points on Nebraska to open the Big Ten season. Justin Fields went an efficient 20/21 passing, mostly targeting Garrett Wilson (seven receptions) and Chris Olave (six receptions) while working in tandem with a two-headed backfield of Master Teague and Oklahoma transfer Trey Sermon. This Saturday night’s Halloween showdown versus No. 18 Penn State isn’t quite as highly anticipated after the Nittany Lions’ loss (and with no “White Out” in Beaver Stadium).

After getting off last week, Georgia has an early road kickoff at Kentucky this Saturday. They obviously cannot look ahead to the Florida game in a couple of weeks.

Notre Dame bounced back from a bit of a sluggish performance in their previous game, dominating with a 42-point victory at Pitt. The Fighting Irish will remain on the road this week against Georgia Tech, but No. 1 Clemson is on deck.

Big 12 overall is actually playing stronger defense this year, and that charge is led by Oklahoma State. The Cowboys have given up just 12.0 points per game through four games, which is tied for eighth in the nation (and four of the teams ahead of them have played just one game). We’ll see how they fare this Saturday against Sam Ehlinger and Texas.

Florida is set to resume activities today after the COVID-19 outbreak within the program died down, so the Gators are at a bit of a disadvantage after having to pause their season. Missouri will be a challenge this Saturday.

BYU continues to dominate their competition, and it feels like they’ll be a team that will continue to be tough to rank while they remain unbeaten. The Cougars are again big favorites this weekend against Western Kentucky.

Wisconsin quarterback Graham Mertz had one of the best games of anyone in college football over the weekend, tossing five touchdowns (three to Jake Ferguson) and just one incompletion against Illinois. But Mertz has reportedly tested positive for COVID-19, which could be huge in an abbreviated season. Hopefully Mertz is feeling OK and can get back with his teammates soon.

Notre Dame will drop out of the top 25 in a couple of weeks.